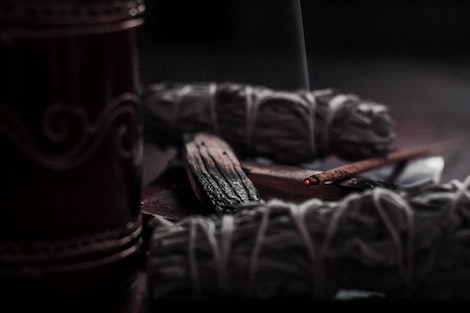 Because every client I see is different, I never know what to expect.

Today’s house cleansing was more challenging than I’d anticipated, but I had undeniable confidence within that I would cleanse the space of negative vibrations.

My morning began the same as every other. I meditated and opened up my sacred space at home. But because I was serving a client I created a ritual to journey to the upper world and learn what I needed to know to assist client X for cleansing her house today.

9.15am Journey to the Upper World

I climbed up a high ladder to reach the upper world, and I crawled through an open brick well to see what land I had arrived upon. Here, I stood in an open space, a yard full of dirt. There were small straw barrels around me, and in front were two mud huts. In both huts lived families. The one straight ahead was clearer and so I walked towards it. There in front was a small little girl who was guarding the doorway. These were the spirits who believed they lived in the house I was to cleanse today.

Their energy was not negative but just misplaced. They believed that this was still their house, but there were  living in the wrong realm. I needed to help them journey to the spirit world. I asked if anyone was there to help me learn what they needed. A strange looking man came forward from around the side of the house. He was red with a devilish looking head. Two horns and he stood up high, so tall.

Again, he wasn’t harmful, but just believed that this was their space. I asked why they were staying. The small girl came forward and said that she was looking for her family. That this was where they were. Next, I saw a vision of wooden floors, and a corner. There was something held in this space. That’s why she stayed, something was left behind.

I told them that this was not their home anymore and that I would help them walk to the light. Together, I envisioned us leaving the space and entering the light. I repeating this process several times until it felt clear.

I thanked the spirits and I left the upper world.

I walked into the house and talked with Client X about what had been going on. She explained that of her family, both herself and her youngest son felt affected from the energy the most, but that her husband and eldest were okay. She explained that it had felt strange since they first moved in and that everything had been a struggle to organize in their home. Nothing worked, everything needed to be rewired and that over 16 workmen had been to the space to get everything back up and running.

I explored the house on my own to feel out the energy and see where I would set the ritual space up. There were 6 levels in the house. From walking around I felt three areas in particular of the house that needed extra care. The first was below the ground level where I could feel the energy change the strongest. And ironically in the whole house, this was the only level that had wooden floors. I walked around the edges and felt in the back corner was where the room needed to be smudged the most. This room was the children’s playroom and it had a strange vibration around me. I felt my heart beat faster and slightly disoriented. I also knew that this was the area the spirits liked to stay the most as it is believed that children are a part of our consciousness up until they turn 9. Children are much more open and receptive to the spirit world from 0-9, and it made sense that the spirits would stay in this space. I continued to explore the house.

The middle level above the house also felt slightly off, and this was the living area, a high communal place and again, perhaps where spirits liked to stay.

The final space that needed care was the bathroom area of the parents. There was a dark energy holding on this space. It was the only other area that felt off. But again, the worst was the children’s playroom and this was where I decided to set up the ritual.

Even though there were 3 key places where spirit was felt, the whole house needed a thorough cleansing and I was determined to help.

I commenced the ceremony by setting up my sacred space calling in the spirits from the 4 directions. I asked for protection for both myself and client X, and then, I took out my feather wand and got to work.

I did not leave any area unattended. I went low, in closets, beneath the couches, under the beds. All the while calling in spirit to cleanse the space, removing any impurities, and dark energies and I assisted the spirits into the light to move them into the next realm.

I told them that they do not belong here anymore, that this is not their home. I wished them love and light and told that there is nothing left for them here, and to move on.

Of all the house, the children’s playroom was the most difficult. Here, the energy was not releasing. I repeated the process again, envisioning myself walking with the spirits to the light. I then moved onto stage 2. Here, I use my chimes and allowed the vibrations to completely kick out any negativity. I finally felt the energy stir in the playroom, but still, it did not release. I repeated this many times and continued to feel the spaces that were clogged, using the chimes to release it.

The bathroom near the parents was holding onto energy swell. As I entered this space I felt my throat tighten and chest heavy. I stayed here for awhile, cleansing the space and telling the spirits to move on.

The higher I went in the house the better things felt. The sunlight was able to pour through the windows and pierce any darkness from the space. We opened up the windows, said final prayers and moved back down into the ceremony space.

I envisioned white light bursting through the heavens up above and into the house, cleansing all negative energy from the space.

It wasn’t until I moved onto stage 4, using Frankinsense that I finally felt the energy clear in the children’s playroom. Frankinsence invites in positive vibrations and it is the highest energy field. I had removed the energy and I needed to replace that space with something positive and beautiful.

Satisfied with the house smudging, I closed the space, said a prayer and thanked spirit for assisting me.

Client X and myself walked around the house and we both agreed that the space felt so much lighter and better. I suggested different ways to help keep the space clean and left some utensils for her for upkeep.

I took a big drink of water and a large deep breath, releasing anything from my body.

I left the house feeling exhausted with energy yet at the same time uplifted knowing that the space was clear.

I came home, took a nurturing bath to remove any impurities that may be lingering.

I cleansed my own home as well, ensuring that no energies stayed with me.

It was a long process, a draining experience. But I felt supported by spirit and knew that I had the Universe’s blessings by my side.

I went back to the house to feel the energy and ensure it had stabilized. Client X informed me that everyone in the house was extremely tired and lethargic the very next day which was unusual. But once that subsided the energy in the house was feeling the best it had. The small child who had been very affected appeared back to its normal self and in a much better mood. I felt around the house and agreed that the energy felt completely different – hooray!

I journeyed to the upper world that evening upon return to check the cleansing of the house. When I arrived there was only clear skies and a large yellow sun in the horizon. I asked to be shown what was needed to know. A small rowboat appeared and took me along a large stream. I just felt open energy, clear skies and the beautiful blazing sun. After some time we arrived at closer to the sun and here I was witnessing the family who believed they lived in the house waving from afar (around 5 spirits). They had gone into the light.

Next to the sun was the red horned creature standing next to it. I asked if he had gone into the light, he said that he is the spirit who walks the realms and assisting others to the light. He belongs neither here nor there. I explained that the house now belonged to Client X, and her family, and that no other spirits were allowed inside. I imagined a large protective bubble around Client X’s house and I filled it with light. Then I used my breath to send the spirits far, far away. I left the upper world feeling confident that the house was now protected of dark energy entering ever again. 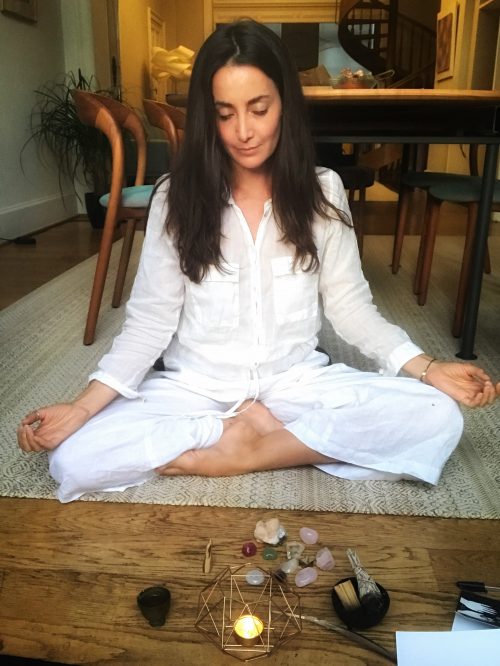 Have you experienced strange energy in your home?

If you are interested in having your House Smudged and live in the United Kingdom, please contact me via my contact form. Thank you, Phoebe x 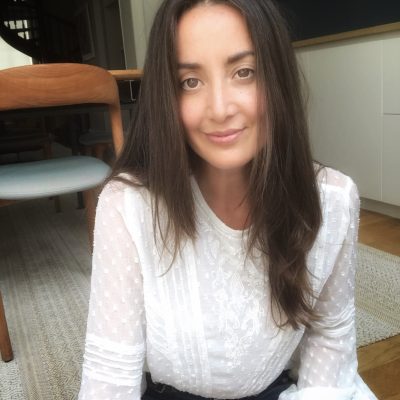 Ask Me Anything!
How to Start Your Day Right 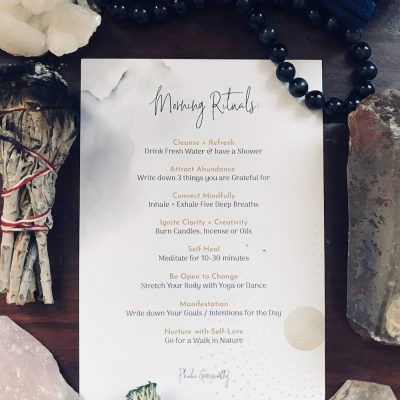 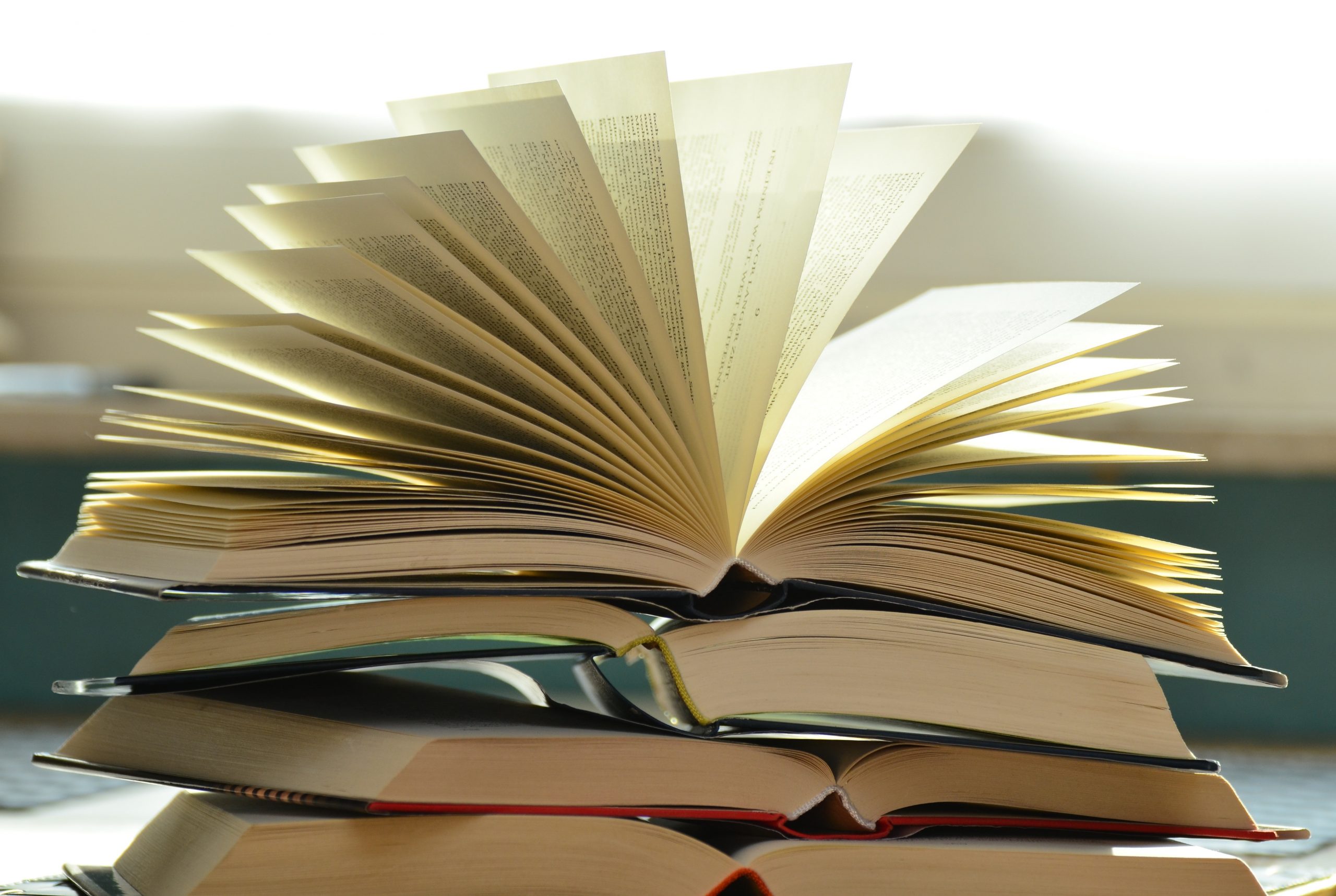 A Gift I Give Myself 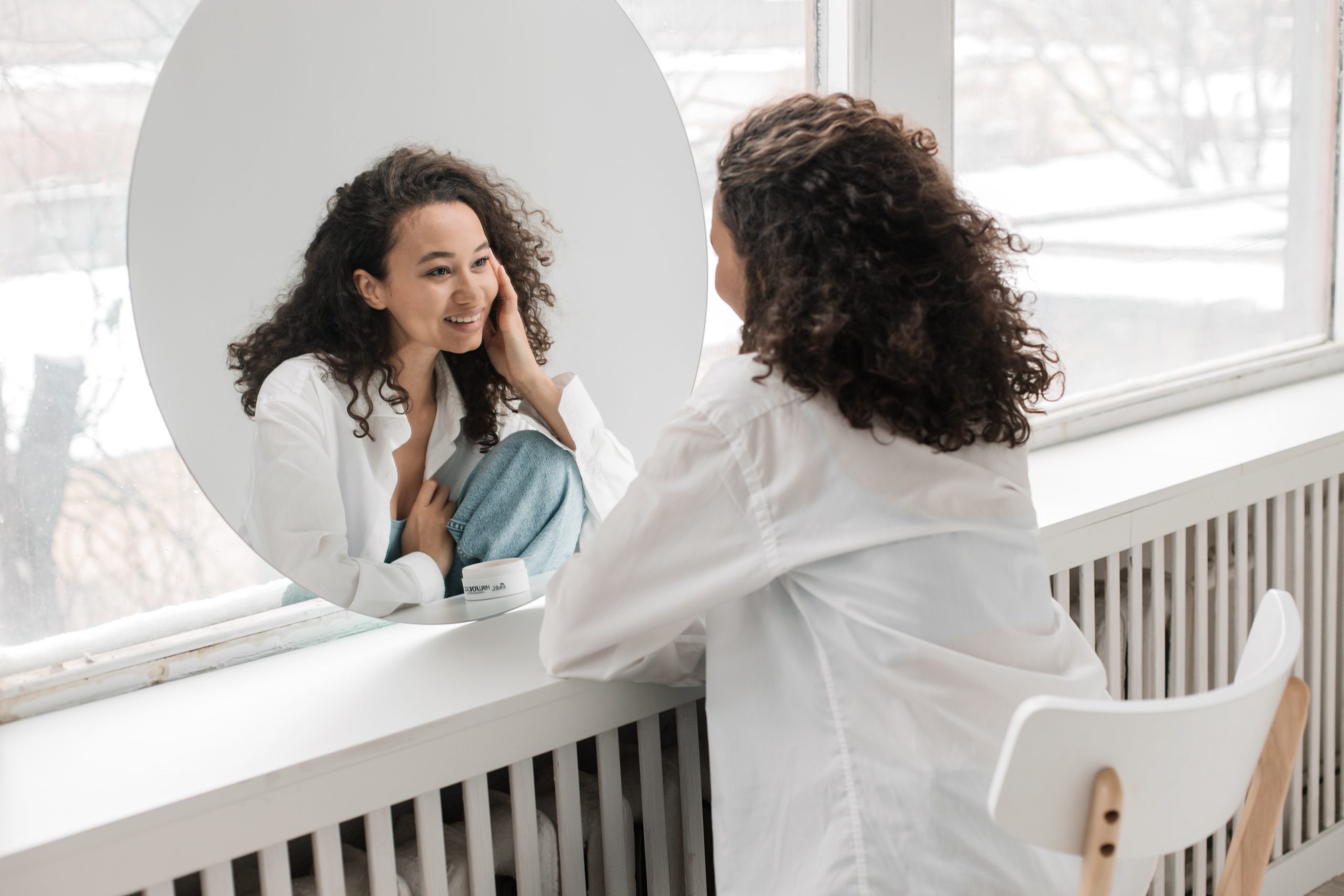 Why didn’t anyone teach us how to love ourselves? 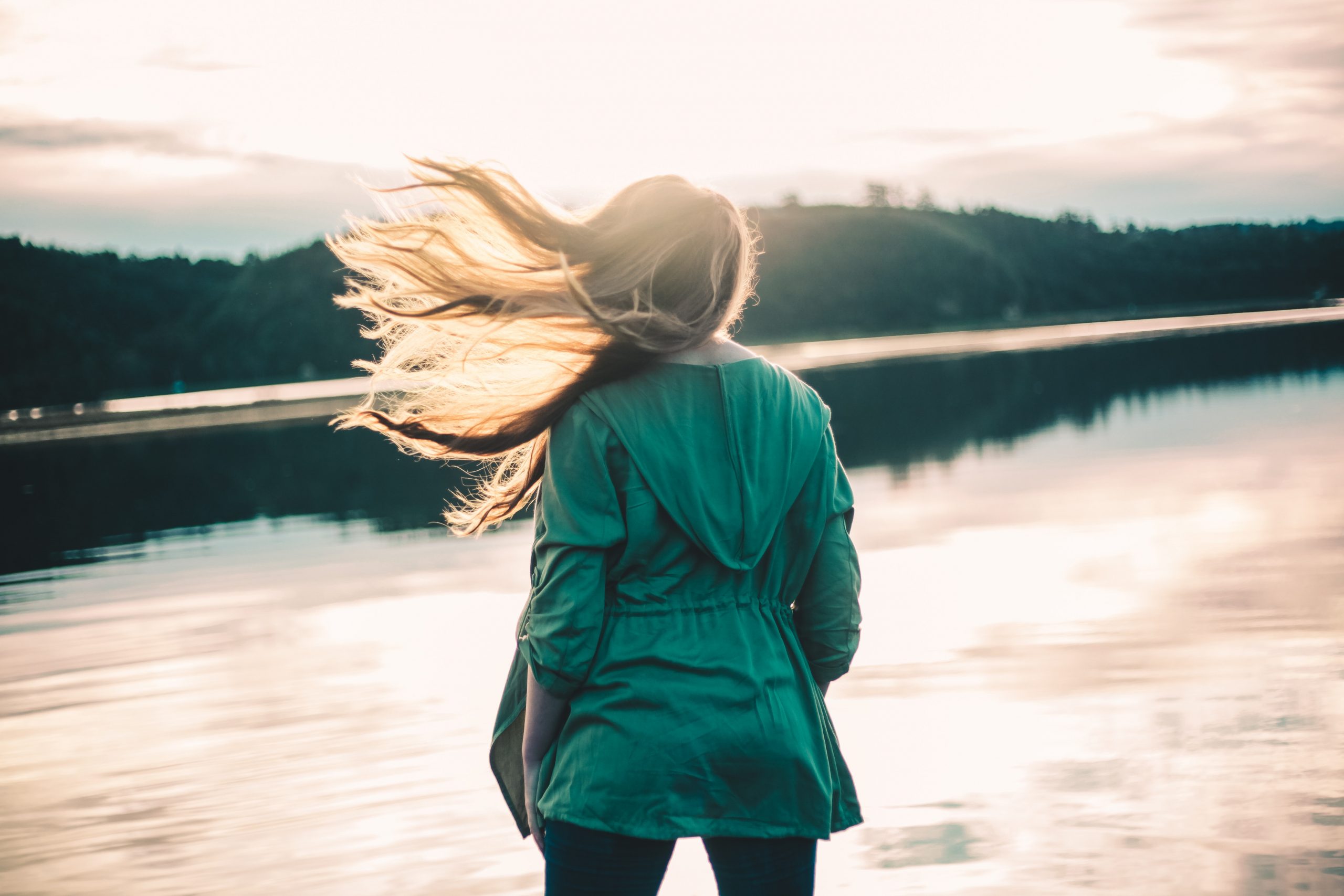 How to Live with Uncertainty?

Let me cleanse your energy today. Close your eyes,

This is what it feels like to ground myself… I s

I Am … what’s your favorite? This was my first